I was reading AKBS – Asrama Kerajaan Brunei Singapura. In one of the articles written by my good friend Awang Haji Duraman bin Tuah, he mentioned about the government early policy of sending student to overseas; in early 50iest to England then to Malaya. When written Brunei Constitution was introduced in 1959, the government then diverted sending students from Malaya to Singapore. I was part of this scheme and sent to Sekolah Tuanku Abdul Rahman (STAR) Ipoh in 1962 with a very little English education background.

Reading the AKBS I wish I could write or at least co-write the same memorial book. A lot of happy memories could be printed out especially when experiencing the cultural shock of staying together in same hostel room with Malayan students. My bed was between 2 students from Kelantan. Whenever they spoke to me, it was with a very thick Kelantan loghat; just like ayam and itek. Macam babau tak saya using sign language. It took time for me to understand what they meant. Another shock was when learning English. I download here part of the class environment written by my senior, Osman Omar as in the book, STAR – Through The Ages 1992. We, the class of 1962 experienced the same environment when learning English under our well known tall bagaikan galah teacher, Cikgu Aziz Khan.

“ Spelling was on the timetable everyday. The idea was to pronounce a word and then spell it. It sounded reasonable and logical. The magic word which Cikgu Karim asked the class to spell that morning was YELLOW.

Jabar from Jerantut Pahang was given the honour to spell it. Jabar was a well-built boy. He had a round face and straight hair. ( Years later, he would turn out to be our hundred yards champion.) He bravely stood up and spelled ‘Y-E-L-O, sir…. Nobody said anything. We were not sure whether it was right or wrong.

Suddenly Zaini Dewa, who was sitting next to me, laughed loudly and said “salah cikgu” and he spelled, Y-E-L-O-W sir. We laughed. Not that we knew he was wrong but his voice was so funny, macam itik nila. Then we heard SHUT UP. We knew where it came from and also knew what it meant. They were the easiest words to remember. Cikgu Karim voice was very powerful and commanding and his face had turned red..

“how do you spell it Omar ?” Choosing me next was natural because I was sitting next to Zaini. I wasn’t sure of the right spelling, but out of fear and shock I spelled ‘Y-E-L-L-O-W sir, and I started praying ! I was beginning to think I was right because everybody remained silence for a few seconds until suddenly The itik nila laughed again !

Why do you laugh, Zaini ? Demanded Cikgu Karim. “Salah Cikgu” he replied.
“Yang betul – Y-E-L-L-O-H sir, he said, instead of the “Y-E-L-O-H he had spelled earlier.

That’s was the story written by Osman Omar.

I went to Malaya after completing my Darjah Enam education in 1962.. At that time there was no sekolah Menengah yet in Brunei. No even Malay medium secondary classes. With a good grade, I presumed, was the reason I was chosen to continue my study in Malaya. I did’nt know the type of scholarship. End of the every month I was given 30 dollars pocket money, that’s all. . I attended Remove Class for a year and turn myself into an English medium full residential school student.

I’m sure a lot of Malay medium students experience the roller coaster of learning English.; not only during those old days but at present day. 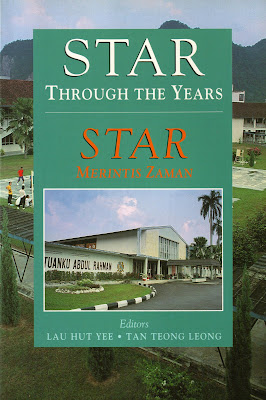 "Macam-macam ada" the happenings in a residential school. The story was edited by our famous Science teacher Cikgu Lau Hut Yee and Art teacher Cikgu Tan Teong Leong. Mr Lau was so dedicated to his "children". Until his retirement he was still single. 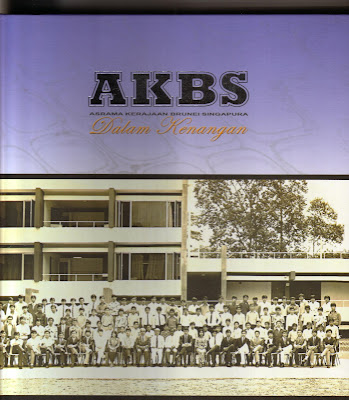 The book tells the story of early Brunei students in Singapore. Many now becoming big bosses in private and public sectors and successful entrepenuers. If you need a copy get it from Pusat Sejarah. 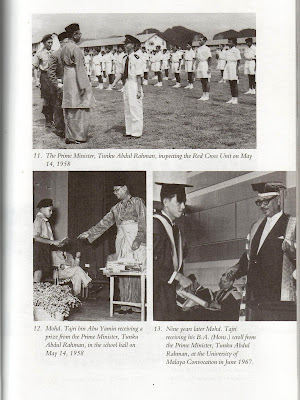 That was Cikgu Lau with a baggy trouser. He was in charge of the Red Cross. The picture below was a life circle of STAR student. Mohd Tajri received a prize from the then PM during a school assembly in 1958. Nine years later Tajri received universiti Malaya scroll from the same PM in 1967. Tajri was one of the pioneer students from ulu part of Malaya and becoming successful
personality. 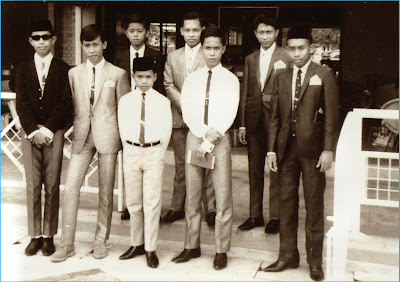 These are a few Brunei students in Singapore. See the fashion in 60ies. Try to recognise them. Maybe one of them is you boss now.

nice story. Happened before i was born..... 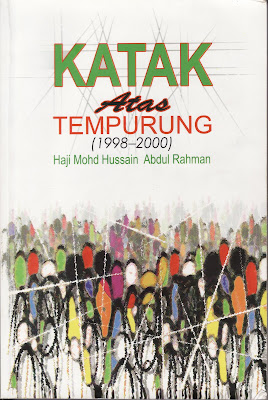 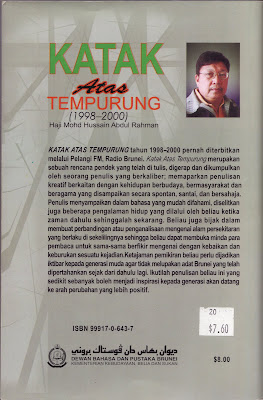